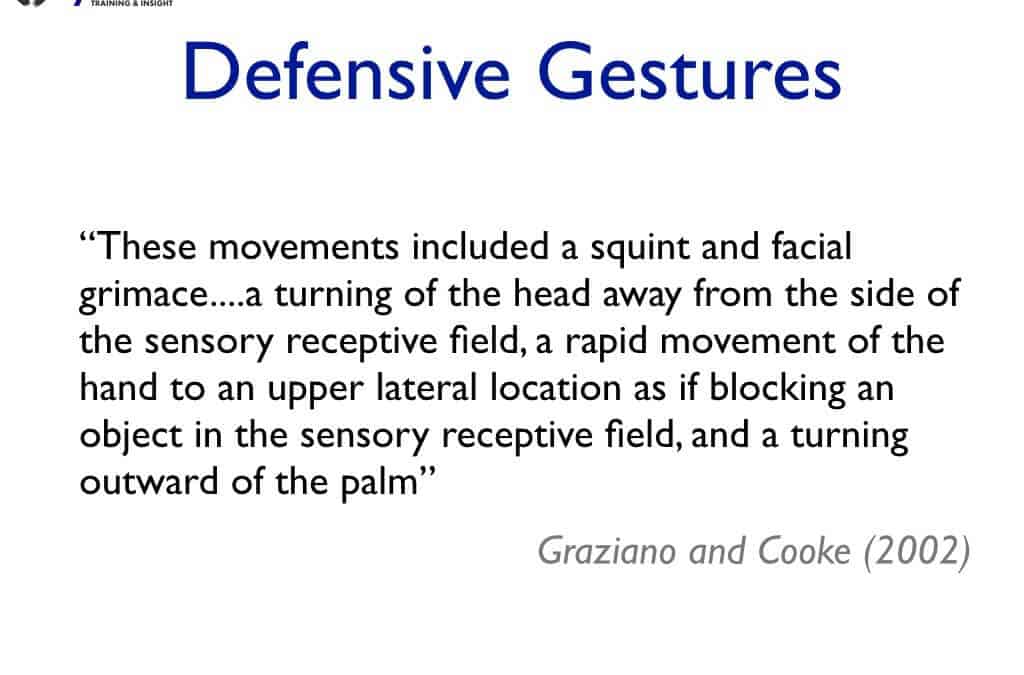 — What’s the fastest thing your body will do to protect itself?   Well, here’s a hint, it is NOT something we can train you to do!  In fact, it is a hardwired instinctive protective response known as the startle reflex and it should have a huge role to play in effective PMVA training.   Researchers studying these ‘defensive gestures’ have found that “for a protective movement in which the hand moved to an upper lateral position and turned outward as if to block an impending threat to the head, the velocity was remarkably fast“.

They clocked this defensive gesture at 230cm/s at peak speed for one test they ran.  Pretty effective for Management of Violence.

What’s more, the researchers noted that over many tests “these movements had a machinelike repeatability over hundreds of trials“

So, let’s get this straight, a non-cognitive (that means that you don’t have to think about it) response to danger which is hardwired into your brain is both incredibly fast and incredibly reliable.  As responsible PMVA Management of Violence trainers it would make sense if we were paying an awful lot of attention to this.  At Dynamis, we have a bank of specific drills which allow our PMVA Management of Violence learners to both model and then experience how the body’s own instinctive protection behaviours can be relied upon and even harnessed to help them to survive sudden unexpected violence.

Here’s a YouTube playlist about our methodology which you can watch right now.

Gerard O’Dea provides tailored PMVA training courses for hospital and healthcare services where people are treated with dignity and shown respect, even in their most difficult moments.  Combining respectful verbalisation skills with last-resort restraint alternatives for personal safety has been his specialty for over ten years as director of training for Dynamis www.dynamis.training/pmva-training