The issue we get asked about the most is how to deal with child to parent violence and child on child violence. At the same time we see many supporting professionals appearing to deny the need for parents to be properly equipped to manage this very real issue, which destabilises families and creates unnecessary labelling for traumatised children.

I understand that the idea of having to hold on to a child to prevent them from seriously hurting themselves or others is an uncomfortable one. It is however a REAL dilemma which happens daily in many thousands of homes across the world.

We know that unfortunately, supporting professionals are often ill equipped and lack the necessary training to give the correct advice around strategies to manage children from trauma. I say this as a former social worker.

So, we have ended up in a situation where parents struggle daily with violence and when they turn to supporting professionals to provide them with the necessary means to protect themselves AND the child they are often met with a blanket response of ‘you are not allowed to hold the child.’

This fear comes from an era when children were restrained forcibly and unnecessarily in the most horrendous situations. Now there seems to be a lack of confidence and trust in therapeutic parents to implement these strategies effectively and safely. So instead, parents are likely to be told that they cannot have training.

What does this mean? Well it means that the violence continues, the parent is more fearful and lacking in confidence and therefore it is more likely there will be an assault resulting in real physical injuries, or an incident where the child will hurt themselves.

I have spent the last two years carefully looking at a way to incorporate therapeutic parenting into strategies which help parents to properly manage violence and also to feel confident in those situations when the child is putting themselves in danger and must be prevented from doing so. I.e. about to jump out of a window or run into a road. It is astonishing how many times situations escalate which could have been prevented simply due to the parents fear and lack of training around when and how to hold a child safely.

The course we have put together [with Dynamis] after a great deal of careful thought and planning, has been met with enthusiasm and a huge sense of relief from parents. The reaction from supporting professionals has been mixed. While some also welcome the new course and realise how useful it will be in helping children to stay in their families, others have greeted the course with dismay. Some have said that they ”can’t let carers access any training where safe holding is shown”. I wonder if perhaps that means they are therefore condoning ‘unsafe holding’ or running away?

Our course makes it really clear that we only ever hold children when there is NO other alternative and where there is serious risk to the child or others. It is not a light-hearted or casual approach. Of course we include all the preventative measures and deescalation strategies too.

Parents and carers need to be trained and given some credibility that they will use these techniques in the way they are trained to use them and as a last resort. Parents and children need to be protected from violence and from aggression arising from children when they are dysregulated.

This real issue needs a strong solution. The weak solution is merely denial and will continue to place children and their carers at significant risk

If supporting professionals continue to bury their heads in the sand on this issue, someone is going to come and bite them on the bum. This is NOT going to go away!

Legal and Practical Basis for Training in relation to violence in the home environment where there is responsibility through fostering or adoptive parenting relationships.

SHERIFFDOM OF SOUTH STRATHCLYDE, DUMFRIES AND GALLOWAY AT HAMILTON

Under the Fatal Accidents and Sudden Deaths Inquiry (Scotland) Act 1976

following an Inquiry heard at the Glo Centre, Motherwell  into the circumstances of the death of

“With the benefit of hindsight however it is now known that tragedies such as that which befell Mrs McKenzie can occur in foster placements, and there is no doubt from the evidence which I heard that lesser attacks on foster carers can and occasionally do take place.  The area of training of foster carers is clearly an important one.

Whereas I am prepared to accept given the evidence which I heard, that […] Intervention Training is more effectively given after foster carers have commenced their caring […] Ms Maclean felt strongly that it ought to be offered to new carers at the outset of their fostering career because that was when they were at their most inexperienced or vulnerable.  I find no fault with that argument.  I can see no reason why such training cannot be given at the outset of a foster carer’s fostering career and repeated perhaps to more effect after a year or two years when they have more experience.  I heard no evidence that this would be harmful – at worst it might be ineffective.

It appears to me to be important that foster carers at the commencement of their fostering careers are equipped with all knowledge with which they can practically be provided, to ensure their safety in carrying out their difficult task.  Whereas it cannot be said that such training would have made any difference in Dawn McKenzie’s case in my view such training should be given to foster carers at the outset of their career and repeated later.  I heard no good reason why this could not be done, and recommend that it should.  The Significant Case Review also took the view that such training should be given to carers of adolescent children, or those in mid childhood before their first placement started.

A review of foster carer training by the Scottish Social Services Council under the auspices of the Scottish Government is currently being undertaken and I understand that that work is well advanced.  I understand that part of that training is to enable foster carers to take an SVQ qualification or similar.  I can see no good reason why Crisis Prevention and Intervention cannot be included in such training, and hope that the SSSC look at this issue.” 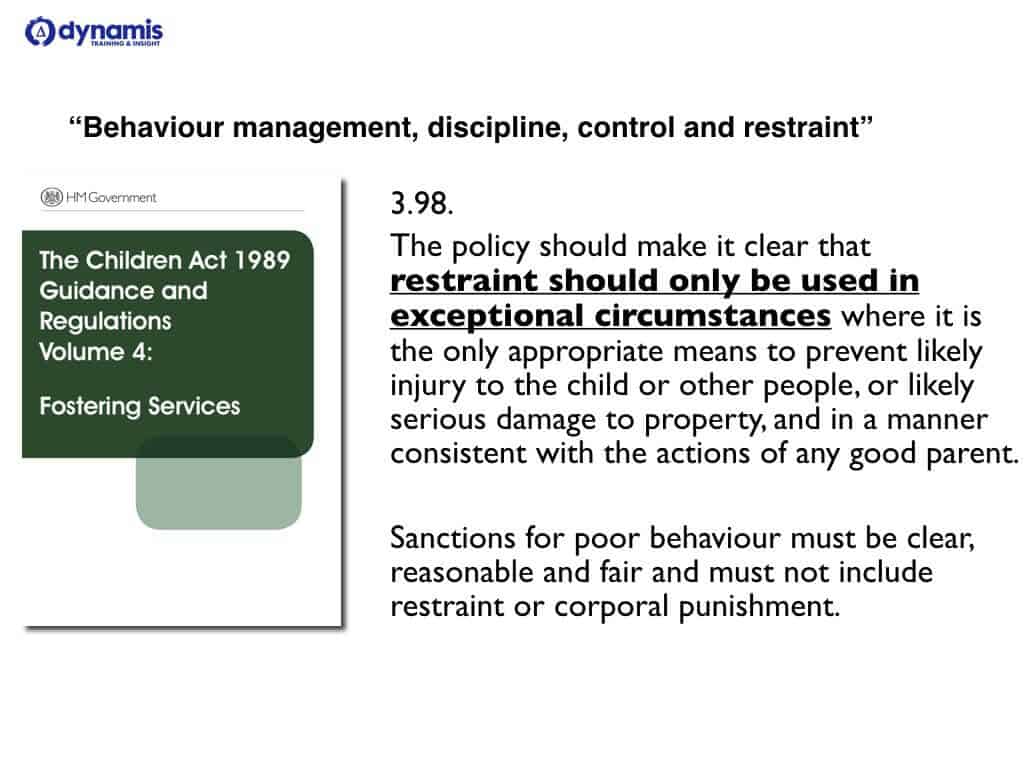 The Fostering Regulations specifically state that restraint CAN be used under the commonly understood legal tests attending to Reasonableness. 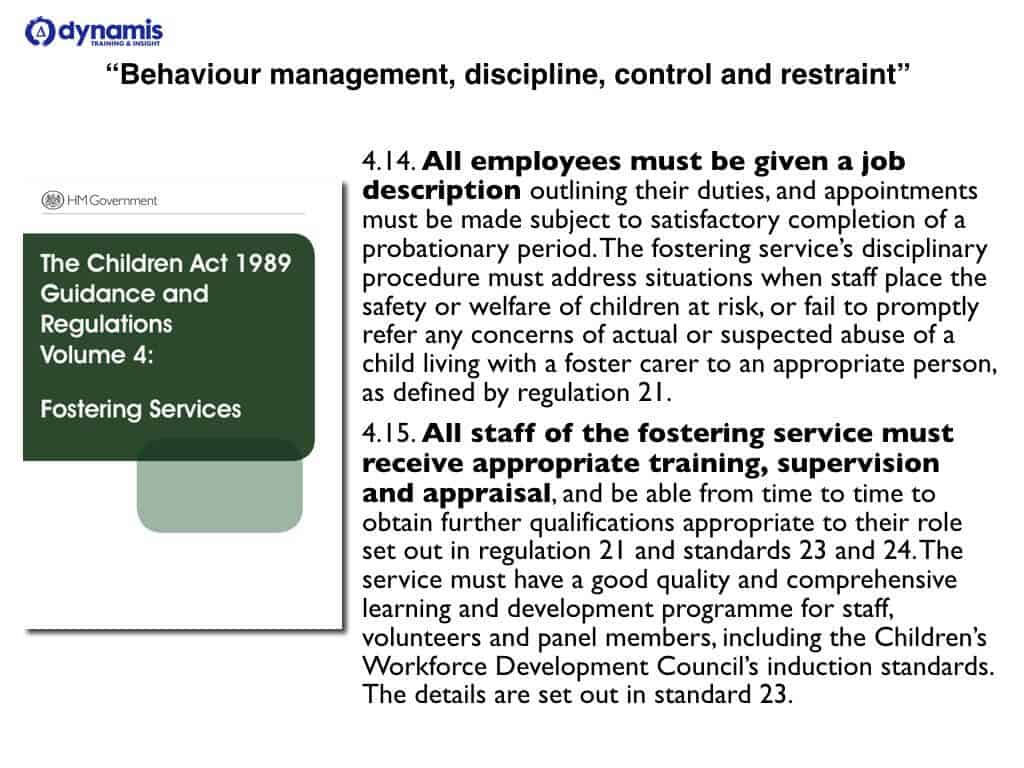 Furthermore the Fostering Regulations state that All staff *must* receive appropriate training. Where a risk of violence is present, training in violence management therefore logically must follow. 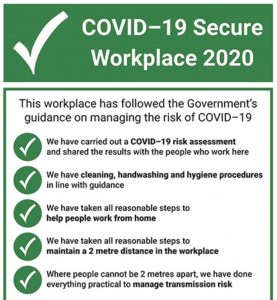 Our team has completed an in-depth Risk Assessment to reduce Covid-19 transmission risk.

We are providing face-to-face training – book a call with a training advisor to discuss.

Alternatively you may Click here to learn about Online and Remote Training.