The accompanying images in this post are of something that has been referred to as a ‘Therapeutic Floor Hold’ in some training materials.   It consistutes, in our view, inappropriate restraint.  The (usually) vulnerable person who is being restrained is first taken to the floor – often through the use of some kind of unbalancing using a ‘trip’.   Once on the floor, the staff fold the person’s arms around their body (forming a cradle, or wrap position) and then hold them from behind to restrict their movement.   The person on top simply applies their bodyweight to the subject underneath, immobilising them through the use of greater mass and the effect of gravity.

The unfortunate thing about a technique like this is that it works, to a large extent.  It may even work so well as to be inescapable. 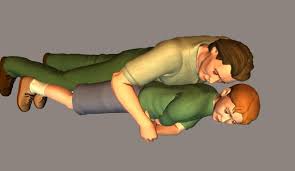 Don’t do this inappropriate restraint!

We need to design and implement restraint techniques for working with children which avoid becoming inappropriate restraint.  Instead, the techniques should be:

IN our next post in this series we will look at more fragile restraint techniques and hope again that no-one is including them in training, anywhere!

All the best for now,