A private healthcare company was fined £150,000 in January 2012 after admitting its part in the death of an elderly nursing home resident who was strangled by a wheelchair lap belt.

Brigid O’Callaghan, known as Vera, was found dead on the morning of October 28, 2005 at Amberley Court Nursing Home in Edgbaston, Birmingham.   The mother-of-five, who was suffering from brain damage following a road traffic accident two years earlier, was staying in the home for a week’s respite care while her daughter and full-time carer took a break.

The city’s crown court heard that there was ‘a degree of sloppiness’ in standards at the home, run by Bupa Care Homes Ltd, at the time of the 74-year-old’s death.    Bupa Care Homes Ltd pleaded guilty at Birmingham Crown Court  to failing to ensure its residents were not exposed to health and safety risks.

It had previously pleaded guilty to other health and safety breaches at Amberley Court Nursing Home, Edgbaston.

BUPA Care Homes (BNH) Ltd, of Bridge House, Outwood Lane, Horsforth, Leeds, pleaded guilty to two breaches of Section 3(1) of the Health and Safety at Work etc. Act 1974. The first charge focused on the issues most closely connected to Mrs O’Callaghan’s death and the second on the potential hazards for the other residents.

The hearing was told how Mrs O’Callaghan had refused help getting into bed and slipped from her wheelchair, causing the lap belt to wrap around her neck.

There were notices warning about the risks of lap belts posted around the home but staff had not been given training into the potential dangers, the court heard.   A medical device specialist told the inquest he knew of similar cases in London and Coventry.

West Midlands Police arrested a nurse and launched an investigation after the death but no charges were brought.         Judge Robert Juckes QC said: ‘Plainly there was a falling away from the standards which the defendants in this case do set for nurses. ‘

“Mrs O’Callaghan’s death was a preventable tragedy caused by a shocking case of mismanagement. The managers of this, and indeed all care homes, have a duty of care for their residents. At the very least they should be making sure that residents are comfortable and safe at night, not left in a wheelchair.

“There were some awful conditions for the elderly residents to live in and hazards that could easily have caused them serious injury.  The home’s managers were not given appropriate monitoring or supervision and as a result the staff were not being properly trained or monitored.

Working in a care home is a specialised job and it’s vital that all employees have the correct training in place, which in this instance, they did not.”

Our “https://www.dynamis.training/safe-holding/” course includes specific guidance to staff about the risks of using any mechanical devices to restrain residents in their care. 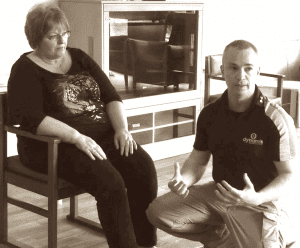