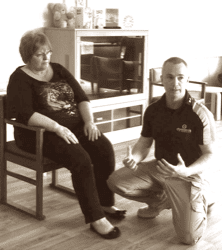 The Oldham Evening Chronicle reports on an incident where a man with a recent history of serious violence towards care home staff, other residents and his family was admitted to another care home after he had caused the death of a resident.

Frederick Adams (93) was bitten on the finger and hit with a shoe by Alfred Baker (73) at Acorn Lodge Care Home, Failsworth. Mr Adams died from blood poisoning and infection from his injuries.

Mr Baker had a history of violence towards his wife in the months before he attacked Mr Adams.  He had been in two different local care homes on emergency respite for his wife shortly before he moved to full-time care at Acorn Lodge in October 2013.

Before Acorn Lodge accepted Mr Baker, he had a long history of striking residents and staff at other care homes in the area.

Despite his background, both social workers and the care home decided he was safe to be around other residents. But he had struck out at a carer within 24 hours of his arrival.

After the attack on Mr Adams Mr Baker was accepted at Downshaw Lodge Care Home in Ashton, around two weeks after Mr Adams’ death.

The home’s manager, Alison Chadwick, told the inquest she had no knowledge of the attack.

She said: “I visited Mr Baker at The Royal Oldham Hospital where he was taken after he had attacked Mr Adams. “Alfred’s social worker mentioned his violent past with his wife but not the attack on Mr Adams.”

Ms Chadwick accepted a document about Mr Baker from social workers on December 12, two days before Mr Baker moved in – but admitted not reading it. Mr Baker went on to bite someone at the Downshaw Lodge home in February.

1)  We read and hear about resident-to-resident violence in care homes quite frequently and often when the incident is serious enough to warrant a newspaper article, it is usually because the fight left one of the residents deceased from their injuries.  There have been several such cases in the last year where residents have died from bites or from being struck by objects.   Key realisation:  older people who are sufficiently upset, distressed and aggressive CAN pose a threat to life in a care environment.   How prepared are our care homes for this?

2) A history of violence is the most accurate predictor of a future violent incident for an individual.  Knowing the person’s history of violence, the triggers for their aggression and the ways in which others have de-escalated that person in the past is vital to the safe running of care homes and to carrying out the legally-required risk-assessments which are commensurate with good management.

3)  Is it possible that the social worker in this case may have actually withheld the information about the client’s violent history, in an effort to secure him a place at the care home?  We have anecdotal evidence in speaking to teams in a wide variety of environments that often they have not been given the full information that they felt they needed to work safely with their clients.  Social workers, who often have the client’s “best interests” at heart, will potentially forget to exercise their complete duty of care to those who may be affected by their omission.  By withholding highly pertinent information about the client’s history of violence, the client is more likely to be accepted into a care service and then “cross your fingers and hope for the best?”

4)  Are our care home staff properly recruited, selected, trained, instructed and supervised to know what to do and have the personal fortitude to do it, when one of their residents violently attacks another resident?   By the nature of many physical assaults and the psychology behind them, the assailant will choose a target who is less able, less likely to fight back or resist…therefore a very vulnerable person.   But are our staff (who may have been recruited to a ‘caring’ but not a ‘safeguarding’ role per-se) ready to intervene?   Do they have the tools to do so?   Can they make good intervention decisions and do they have the physical ability to stop such an incident?