Community Safety and the Threat of Knife Crime: Part 2

ADDRESSING THE RISK OF KNIFE ASSAULT
If your team is actually facing the risk of a knife assault, how do you assess it and begin to control the risks?  First of all, let’s be clear about one thing:

Non-police staff should not be expected to deal with any incident involving a weapon.

This is a golden rule.   The logic is simple in that if the police were called and told that you there is a person with a weapon who is trying to hurt themselves or others, then the police despatch will send the appropriately trained and competent officers to the scene.   When those police arrive, they will have an arsenal of weaponry and equipment (such as batons, tasers, firearms, maybe shields and CS spray) which they will use to bring the situation into safety.  The argument has always been that if you and your team do not have such an arsenal of weapons and equipment, then you shouldn’t be expected to confront the person yourself.

So, at the outset, let me state that I fully support this statement and the logic which goes with it.  However, where we have teams of contact professionals out on the streets who are dealing with people in Anti-Social Behaviour, Night Noise, or other Enforcement roles, they are going to be engaging with people who may have blades.

Those people will sometimes respond negatively during their interaction with our community safety teams and it is just possible that a knife or other edged weapon might be introduced into the situation even though it was never expected by the people who went into the interaction.

This point is crucial.   We would never send an unprepared or untrained person into a situation where we knew that there was a certain risk of a dangerous situation emerging.

Consider though, that we do regularly train people to deal with life-threatening events which are highly unlikely to happen to them but which are nevertheless things which we can’t totally eliminate (the pervasive risk of fire and the resulting mandatory fire drill is a good example).   We teach people that however unlikely, if there is a fire, they should escape from it.   We spend a lot of time ensuring that they know where fire equipment, escape routes are and what the procedures are for escaping a fire.

When we do that, we never expect a person to run INTO or TOWARDS a burning building.  Likewise, when we consider taking on a client for our advanced Edged Weapon Protection course, it is always clear that we don’t want (non-police) staff walking INTO or TOWARDS a situation where there is a blade present.  Our job is to help them deal with the situation when they didn’t know a blade was present but it is now in use against them or their colleagues, by complete surprise.

CAN’T THEY JUST RUN AWAY?

Sometimes, yes, there is the opportunity to run away, but only in very specific circumstances.  Here is a famous video regarding the “21ft rule” which has been around for an awful long time in the world of tactics.   It shows the process by which we found the concept now known as the ‘reactionary gap’.  Please ignore the focus on firearms here as the important information is in looking at the reaction times.

I have written (in my book on Lone Worker Safety) about the use of fine and complex motor skills during high stress moments and the effects of the 21ft rule which compound the problems.  I once set up a scenario exercise asking a lone worker to exit a room as I came charging out of my chair at him.   The exercise required him to turn 180-degrees and run for the door as fast as possible.  He never got to the running bit, not because I caught him, but because in an effort to turn around for the door as rapidly as possible, he tripped over himself and landed flat on the floor, hand forlornly extended out toward the door, 8 feet away.  This is a peculiar aspect of running as fast as your feet will carry you, in panic:  often you will try to run faster than your feet will carry you, and you will fall on the floor.

Watch the video again.   Each subject is in ‘ambush range’ and each subject attempts to back away and or run, but none of them successfully manage to get to safety before the knife is on them.  Several of them are falling when the blade bites.

Consider also that often in a situation where a blade is presented and used, the first thing anyone knows about it is that they are feeling a slightly different quality and placement of the hits on their body, and that someone in the confrontation is bleeding.  Sometimes it is when the person who was hit with the blade collapses from blood loss.

Those who hope that staff can 1)  avoid every situation where there is a knife present and then 2) run away on presentation of the knife into the scenario are failing to think deeply enough about the actual problem. 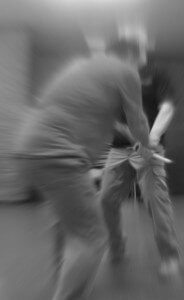 As I understand it, the technology of producing stab-proof and slash-proof clothing and gear is advancing year-on-year and at this time it is possible to procure such gear in different sizes for different functions and even in covert forms.    This last point is important.   Consider that Community Safety Teams are active in, well, the community all the time and as such, if they present in a paramilitary style uniform, with a stab-proof vest on, then this will have an impact on the interactions they have with their people in the community.  It may also breed the wrong kind of attitudes within the teams who use them

As an aside, I once called a local authority enforcement team who had been famously ‘outed’ in the press for buying stab-proof vests worth tens of thousands of pounds.  I asked about the team’s training in conflict management and offered my services, only to be told that the team were not yet receiving training ‘like that’ and that they would be in touch when or if they need such a thing!  Let’s issue armour to people whose conflict management skills we haven’t assessed yet!

In Part One of this article, I examined the place of effective communication and verbalisation skills in the ‘armoury’ of a community-based team, so I won’t go further here, apart from to say that Personal Protective Equipment (PPE) can be a helpful and valuable component of an overall risk-reduction strategy.   However, it typically comes at the end of a long line of other options.

As with any equipment though, it is not enough to simply provide it and hope for the best.   Staff must be trained in how to correctly use the gear, what its limitations are, what standards it has been tested against, when it is likely to fail and what other things they should be doing to make their situation safe. 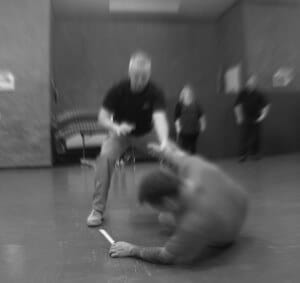 Training to deal with the sudden appearance of an edged weapon in a confrontation is full of paradoxes.   In our training we specifically discuss 5 paradoxes of training in this area, although I think there may be more.

One of them is that although we endeavour to avoid being touched by the blade in the training exercises, we must accept that the blade will touch us and ‘cut’ us in both training and in reality.   We have already agreed that in many situations, the wounds have already been made by the time the person being hit by the blade realises that there is an edged weapon involved.  In this case, the wounding happens before the tactics kick in…there’s another paradox!

YES – we focus on tactics which will mitigate the risks of an edged weapon assault.   On the best day possible, a person attacked with knife will not be cut, sliced or stabbed, but this is a goal which is not fully realistic.   The most realistic result is that there will be contact with the blade, but that our tactics will stop those contacts being immediately fatal or incapacitating and allow us to continue to seek safety, either in-contact with the assailant or by escaping from their proximity as the opportunity arises.

The good news is that the murder rate is static.  In fact murder rates in developed countries have stalled and or they are dropping.   Having said that the rates of violent assault are still high.   So, people are being assaulted as ever before, but less people are dying from those assaults?   How so?   Well, advances in Emergency Medical Services, in the shape of expert paramedics and their fully-equipped ambulances and copious amounts of blood for transfusions really helps.  These days you can sustain pretty horrific injuries and still get patched up, *IF* we can get an ambulance to you in a decent amount of time.  (see Social Worker Claire Selwood’s case) 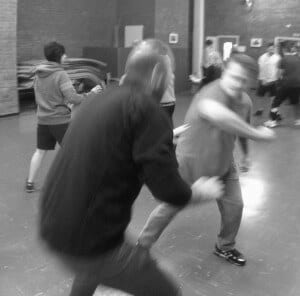 So, our training which is designed to help staff to carefully and safely approach and address the risks of a bladed weapon assault, passes through several phases, starting with simple skills about how to minimise the effectiveness of slashing, stabbing and thrusting movements with the blade which anyone can learn in a few hours of dedicated and focussed practice with a qualified and professional trainer.

Next, our learners begin to explore both instinctive protective behaviours which are integral to their body’s survival system and also the assailant’s predictable behaviours as we interfere with their use of the blade.

We progress through stages of training which help the learners to get a feeling of control and ‘relative comfort’ with what is happening, gradually allowing them to explore their options for bringing the situation into safety.

All of which is quite intense and requires hours of work, however we achieve excellent results – in safety – by carefully replicating the process and the pressure of real knife assaults so that we achieve the best training fidelity possible and send our Community Safety clients back to their neighbourhoods to keep the peace.

To read Part One of this article, focussed on preventative measures, please visit the blog page:  https://www.dynamis.training/community-safety-and-the-threat-of-knife-crime-part-1/ 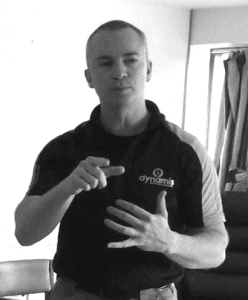 How many people should we train in positive handling in our school?