Training for Restraint:: things to avoid (#6) escorts on aircraft 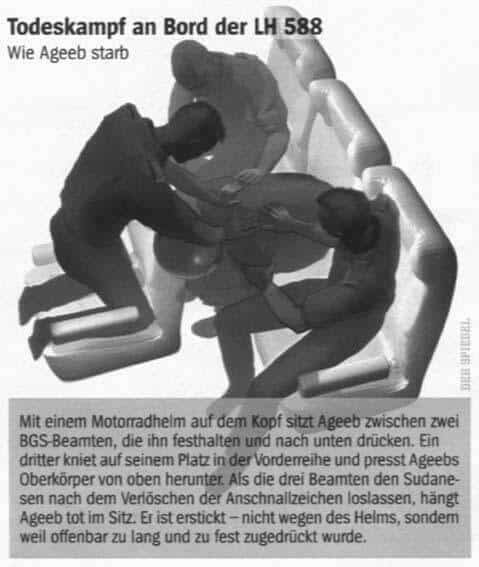 The accompanying photo to this post comes from a restraint-related death of a deportee which happened in 1999 in Germany.  The man who died was called Aamir Agheeb and he was a Sudanese national who died during an aircraft restraint on a Lufthansa flight (see news story).   Restraint during deportation has become national-level news here in the UK where for a couple of years we observed the case of Jimmy Mubenga who died during an aircraft restraint on a British Airways flight in October 2010.   In the Mubenga case, three security officers were prosecuted for his manslaughter but were acquitted. 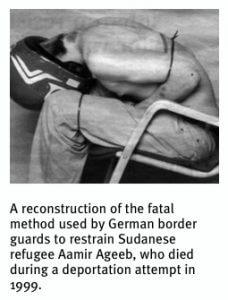 The spaces on-board an aircraft and the cramped ‘social space’ which exists within the cabin, with passengers, aircrew and immigration escorts all trying to achieve slightly different goals in the same space,  almost certainly contributes to the difficulties officers have.  These pressures, of space and social context, create a lot of stress in bringing resistant subjects into safe control through restraint techniques on board an aircraft.  Often though, in the cases we have been able to explore, there are consistent elements of the story of these events which can be highlighted with reference to making aircraft restraint safer.

For an excellent analysis of deportee deaths, how and where they happened and the restraint during deportation aspects, please read the IRR article here.