A South Lanarkshire care home provider was heavily fined after an elderly resident died after breaking her neck in a fall.

At Hamilton Sheriff Court, BUPA Care Homes (Carrick) Ltd was fined £57,000 after pleading guilty to a breach of Section 3 of the Health and Safety at Work etc Act 1974, which led to the death of Mrs Elizabeth Stevenson, 88.

BUPA Care Homes (Carrick) Ltd admitted to failing to review and update a risk assessment for Mrs Stevenson and failing to provide adequate instruction and supervision to their employees engaged in moving and handling residents of Highgate Care Home in Uddingston.

On the morning of 22 October 2008, a carer in the home was in the process of assisting Mrs Stevenson in undressing in order to transfer her from her bed to her shower chair when Mrs Stevenson fell to the ground.

The carer, who had only very shortly before taken up work at the home, was unaware that a care plan assessment carried out a month earlier stated that two people were required to transfer Mrs Stevenson safely from her bed into the shower chair.

Mrs Stevenson, who had been a resident at the home since September 2007, was taken to Monklands General Hospital where she was found to have a broken neck. She died the following day as a result of her injuries.

A HSE investigation found that as part of Mrs Stevenson’s care plan a ‘Safe System of Work Assessment’ on how to move Mrs Stevenson safely had been undertaken on 8 March 2008. This stated that she required the minimum assistance of one person, and that this should be updated after 12 months or sooner if there was any significant change in her mobility.

On 8 September 2008 as part of her care plan known as a “Quest Individual Assessment”, Mrs Stevenson was assessed as requiring the assistance of two people for washing, dressing and undressing. However, the Safe System of Work Assessment was not updated and continued to indicate one person would suffice to move her safely.

The carer who had been assisting Mrs Stevenson on the morning of her fall had been given insufficient instruction and was not adequately supervised in relation to the handling of this lady and her specific needs.

The investigation concluded that the death of Mrs Stevenson was due to a failure on BUPA’s part to ensure that Mrs Stevenson’s Safe System of Work Assessment was updated and that its employees were adequately instructed and supervised in how to move Mrs Stevenson safely.

“Care homes have a responsibility to look after their residents, who are often vulnerable and not able to look after themselves. In this case the standard of care provided to Mrs Stevenson by BUPA Care Homes (Carrick) Ltd fell below acceptable standards, with tragic consequences.

“This is not an isolated incident and every year there are numerous residents who suffer serious injuries as a result of a fall in a care home. To help avoid similar incidents  it is crucial that care providers ensure they have thorough care plans for their residents in place and that their staff are properly trained and supported to make these plans work in practice.” 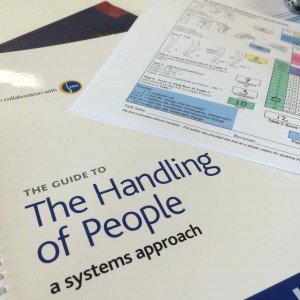 Gerard O’Dea is a conflict management, personal safety and physical interventions training consultant.  He is qualified in the Safer Handling of People with a BTEC Level 4 Award from RoSPA.  He is the training director for Dynamis, a specialist in personal safety and violence reduction initiatives and the European Adviser for ‘Verbal Defense and Influence’, a global programme which addresses the spectrum of human conflict.  www.dynamis.training